I've dabbled in freelance work for some time. The work has given me valuable experience covering events, growing my writing portfolio and getting the chance to cover lots of sports. ​From blogs to online work to stories printed in newspapers, take a look at some of the work I've done.

Thanks to a colleague, I had the chance to cover the 2016 WNBA Finals between the Los Angeles Sparks and Minnesota Lynch for USA Today. I covered Game 1 and Game 2 of the series at Target Center in Minneapolis, then I wrote a preview story in between. The stories from USA Today were picked up by other publications across the country.
​

Below is some freelance work I did as a local sports stringer, covering NCAA volleyball on the three different occasions at the University of Minnesota campus in Minneapolis.
These assignments were coordinated through my work as a freelancer for the Star Tribune. Newspapers in Omaha, Neb., North Carolina and Eugene, Ore. needed a stringer to cover the NCAA volleyball tournament.
No. 10 Gophers end Jays' tournament stay
​Omaha World-Herald
Dec. 4, 2010
​
Minnesota celebrates at the end of their third and clinching NCAA college volleyball tournament game against Creighton in Minneapolis, Saturday, Dec. 4, 2010. 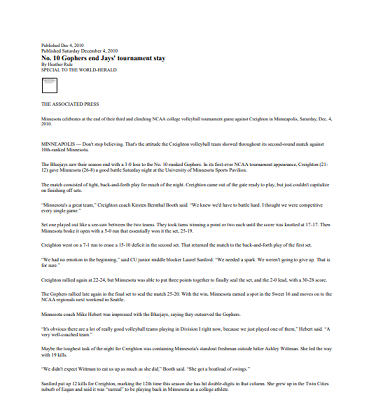 The St. Cloud State men’s hockey team will head into the NCAA tournament as the NCHC Frozen Faceoff runner-up for the second year in a row.
​
Return to top